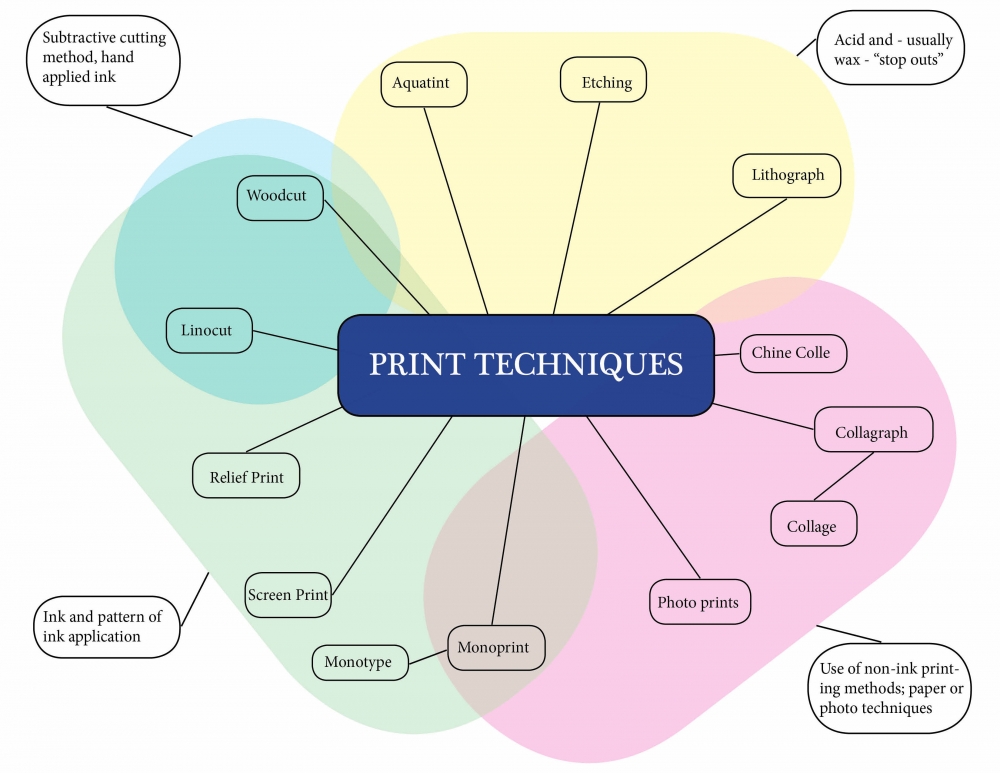 The current exhibition on view a the Gallery focuses on printmaking, highlighting various styles and techniques within the general medium. Prints are characterized by the impression the unique block or plate leave on the surface - usually paper - that they are printed on, but differ in many preparations, methods, and materials. Here is a brief glossary of the styles represented by the exhibition Print Selections from the Milbank Collection (running November 7th - December 19th).

All artworks can be viewed by going to the Exhibitions tab of the website, under Print Selections from the Milbank Collection.

This method utilizes a - usually copper - plate, a waxy “stop out” to create patterns, and an acid bath to create dimension and shading. The artist draws a series of layers of the stop-out onto the plate in a pattern used to create shading in the finished product, and between each layer of waxy stop-out, an acid bath is used to erode the metal. With each acid bath, exposed metal etches further and creates a heavier application of ink in the final result.

The chine-collé method is a technique often related to collage with respect to the bonding of paper to paper during the printmaking process - but it is distinctly different. While collage binds paper and other elements using an adhesive, chine-collé is done by adding a thin paper element to a prepped and inked plate before printing, which adheres the paper to the print during the printing process.

Drypoint is a style of intaglio printmaking in which an image is scratched into a - usually copper - plate using a sharp tool, often diamond or metal tipped. This technique generally has a distinctive fricative edging to the lines, created by “burrs” or ragged metal edges on the cuts left by the tool in soft metal plates.

The linocut technique - a shortening of the term “linoleum cut” - features a hard rubber block and cutting tools to create a stamp-like block. This block is fed through a printing press or hand pressed to create a print in which the cut portions of the block are the negative space, creating white lines on the inked surface.

Lithographs incorporate a mixture of hydrophobic and hydrophilic materials to create a surface that is not physically etched but which repels ink in such a way as to create a design similar to an etching. Traditionally created on stone plates, lithographs are made by applying a grease treatment in the desired pattern on a wet block. When inked, the wet parts of the stone repel the oily ink, and the pattern created in grease collects it. When printed, the ink is transfered to the paper and the image is created.

An image that is part of a series but is unique. Can be any style of print - woodcut, etching, etc - but only a single impression is made using the specific arrangements. Usually the artist will paint by hand or use collage or chine-collé techniques to create a unique print that becomes part of a series from the same block or surface. With monoprints, there is a pattern that remains consistent throughout the entire series, all utilizing the same block - i.e. using an etched plate combined with chine-collé and unique color palates per print.

An image that is unique with no copies or is not part of a series. Similar to monoprint, but a monotype is a print that is completely unique, and more akin to a traditional painting. In a monotype, the artist usually uses a surface such as glass or a flat plate and paints directly onto the surface of the plate, layering as desired. The plate is then printed as usual, and cleaned after each use.

Silkscreen prints utilize a superfine screen and a physical stencil that blocks ink from passing through the screen. Unlike methods where a design is inked first and then printed, in silkscreening the design on the screen is placed onto the desired medium - fabric, paper, wood, etc. - and then the ink is applied and spread with pressure across the screen to create a print.

Woodcuts are a style of print similar to a linocut in that the block of wood is carved into using metal tools that leave a negative space that will not collect and print ink during the printing process - the uncut portion of the block retains the ink. Woodcut prints often have multiple layers, each with a different pattern, that interlock and create a design with multiple colors or tones.