Anders Wahlstedt Fine Art is pleased to present Chris Macdonald: Recent Sculpture, the artist’s first solo exhibition with the gallery. Macdonald’s newest body of work consists of a multitude of small scale sculptures, painted with enamel and created from galvanized metal. Each new work is displayed on a 4ft x 7ft wooden table which allows for a multitude of relationships, categorizations and conversations to emerge within and between each individual sculpture.

In his latest exhibition Macdonald’s dense, wooden sculptures of the past are replaced with a lighter more whimsical medium. Notions of play and technology reminiscent of previous works continue to be explored but with a more refined execution. Abstraction and representation are blurred allowing for multiple narratives to emerge. Each piece can allude to machinery, toys, architecture and contemporary sculpture simultaneously.

There is a strong relationship evident in these works to Calder’s painted mobiles, often viewed as drawings in space. Unsurprisingly, Macdonald’s recent sculptures begin with a drawing on a square sheet of thin metal. The paper like surface lends itself to this two dimensional art form, which through the process of reduction is molded into a three dimensional object. However, unlike Calder’s mobiles, that gently move in space, Macdonald’s miniature pieces remain static, implying movement through a continued investigation into mass, scale, line and color. The result is a sense of delicacy and weightiness. Tense abstractions ready to burst from their immobility at any moment.

Chris Macdonald: Recent Sculpture will be on view from September 14th to October 21st, 2016. An opening reception will be held on Wednesday, September 14th from 5:30 to 8:30PM. 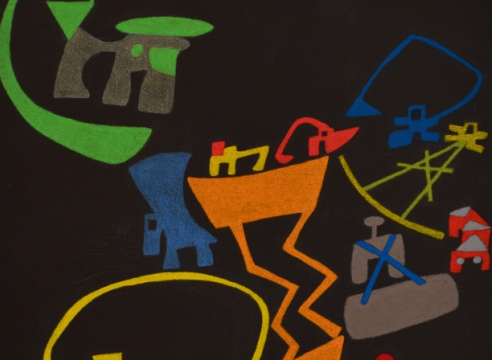 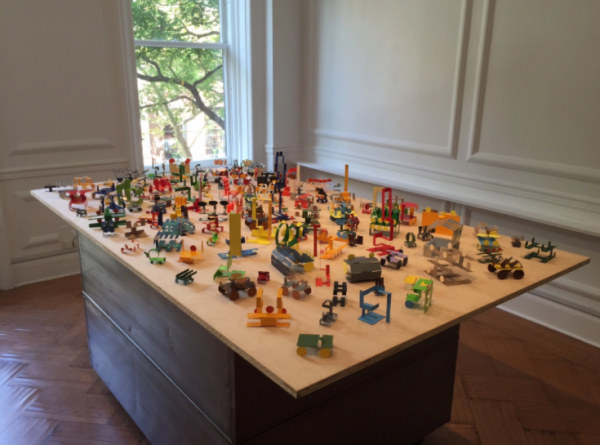 In his latest exhibition Macdonald’s dense, wooden sculptures of the past are replaced with a lighter more whimsical medium.