Watercolor & pencil on board

Signed & dated in pencil on verso

Signed & inscribed by the artist in pencil lower margin

Helen Frankenthaler
Helen Frankenthaler (1928-2011), whose career spanned a remarkable six decades, is widely recognized as one of the most important American artists of the twentieth century. She was an enormously influential second generation postwar American abstract painter who played a vital role in the shift from Abstract Expressionism to Color Field painting. In her work, Frankenthaler united a conception of the canvas as both a formalized field and a realm for gestural expression through line. Her remarkable body of work and colorist explorations have wrought a profound impact on contemporary art.

Frankenthaler was born on December 12th, 1928 and raised in New York City by her parents, New York State Supreme Court Justice Alfred Frankenthaler and his wife Martha. She attended the Dalton School, where she studied art under Rufino Tamayo. After graduating high school, Frankenthaler attended Bennington College, where she was a student of Paul Feeley. Her career at a professional artist began in earnest in 1950, when the influential Adolph Gottlieb chose her painting Beach (1950) for his exhibition Fifteen Unknowns: Selected by Artists of the Kootz Gallery. The following year, Frankenthaler mounted her first solo exhibition at New York’s famed Tibor de Nagy gallery. An encounter and subsequent relationship with renowned art critic Clement Greenberg, who championed her original talent, only amplified her own artistic influence and international recognition. She remained, for the six decades of her artistic career, a tireless advocate for artistic innovation and experimentation, and continued to exert a powerful influence over the development of American painting and printmaking.

Sonia Gechtoff
Sonia Geschtoff (1926-) was one of the most successful Abstract Expressionist painters of her generation in the Bay Area. Gechtoff was born in Philadelphia in 1926 to parents who instilled in her a deep appreciation for the arts. Her father was the well-regarded Russian-born genre painter Leonid Gechtoff, who encouraged her from the age of five to sit and paint alongside him. Her mother, Ethel, managed several art galleries. Gechtoff’s talent was discernable from a young age and nurtured by both her parents and her instructors at a series of schools for artistically gifted children. In 1950, she received her BFA from the Philadelphia Museum School of Art. The following year, Gechtoff moved to San Francisco and began her career working within the vibrant creative community of Bay Area Abstract Expressionists. She garnered national recognition in 1954 when her art was included in the Guggenheim’s Younger American Painters Show alongside the work of Jackson Pollock, Willem de Kooning, Franz Kline, and Robert Motherwell.

Gechtoff’s distinctive style, which began to emerge at the time, is defined by thick, energetic brushstrokes and bold colors on impressively sized canvases. Color—truly luscious and vibrant color—is at the heart of all of Gechtoff’s work. This is not the color of closely observed nature, but rather the heightened hues of memory and association. It is the interplay between color and line, between architectural framework and evocative pigment, that defines Gechtoff’s most powerful and compelling work.

Pat Lipsky
Born in New York City in 1941, Pat Lipsky (1941-) was raised by an engineer father and an artist mother. She received her BFA from Cornell University in 1963 and would go on to earn her MFA from the Graduate Program in Painting at Hunter College, where she studied under the renowned painter and sculptor Tony Smith. Lipsky had her first one-woman show at André Emmerich Gallery in 1970, at which time she had already garnered critical acclaim for her bold pictorial intelligence.

Over her long and impressive career, Lipsky’s work has been associated with and influenced by Lyrical Abstraction, Color Field Painting, and Geometric Abstraction. She is often identified with the school of Post-Painterly Abstraction, although the artist herself has challenged this identification and lists a diverse array of influences that include artists from Rothko and Frankenthaler to Joseph Cornell, Giorgione, and Titian. Her art is profoundly rooted in her deep reading of and engagement with the long tradition of art history and broader cultural movements.

Edda Renouf
Edda Renouf was born in 1943 to American parents in Mexico City. She attended Sarah Lawrence College, from which she graduated with a BA. She went on to earn her MFA from Columbia University. She has exhibited extensively in both the United States and Europe, and has lived and worked between New York and Paris since 1973.

Renouf creates intricate patterns using small markings to draw the viewer into her compositions. She allows her work to slowly unfurl and speak for itself. Whether losing herself in the meditative aspects of nature with delicate washes of color or the sensuous/sinuous geometry of line, Renouf’s drawings, paintings, and prints are preoccupied with the beauty of minutiae/ little details. The subdued colors derive directly from the world around us: the red desert of Arizona; the grey of a stony mountainside; the harmony between a serene, sandy beach and the white clouds in a motionless sky. The simplicity of Renouf’s compositions coupled with the dots, cross-hatchings, fine lines, and scratches focused in different regions on the page demonstrate the artist’s careful, precise approach to making art

Miriam Schapiro
Miriam Schapiro (1923-2015) was born in Toronto in 1923 and raised in Flatbush, Brooklyn, by Russian Jewish parents who encouraged her interest in and pursuit of a career as an artist. As a teen, Schapiro took art classes at the Museum of Modern Art in New York, where she would exhibit work of her own scant decades later.

Schapiro, who died last year at the age of 91, left behind an impressive legacy. After receiving her MFA at the University of Iowa, Schapiro moved to New York City, where she first won recognition in the aggressively male world of Abstract Expressionism. Her work was included in the 1957 “New Talent” show at the Museum of Modern Art and she had her first solo show the following year at André Emmerich Gallery. The 1960s were a period of profound political and artistic transformation for Schapiro, as she wholeheartedly embraced the ideology of feminism and sought to redefine her artistic practice by its tenants. The decade saw her turning away from the pure abstraction that had brought her initial acclaim and beginning to explore the feminist motifs and ideas that would shape her life’s work. The egg, for Schapiro, was a symbol of both female fertility and creative fecundity, and appears repeatedly in her art.

Schapiro founded the groundbreaking Feminist Art Program at California Institute of the Arts in 1971 with Judy Chicago. The following year, she and Chicago organized the hugely influential installation Womanhouse in Los Angeles. In the late seventies, Schapiro helped found the Pattern and Decoration movement, which sought to redefine the role of women in the arts and to elevate to fine art the often anonymous labor of women in the domestic sphere. She was a founding member of both Heresies journal and the New York Feminist Art Institute. 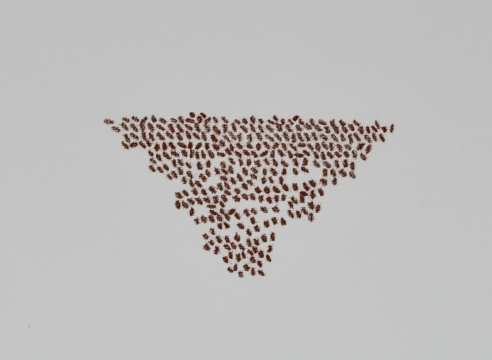 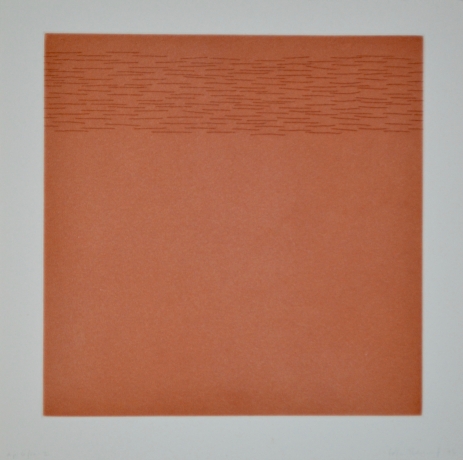 Anders Wahlstedt Fine Art is pleased to announce the exhibition “Line Into Shape,” a group show with etchings, aquatints, and a watercolor by Peter Schuyff and Edda Renouf.